Tthe farmers from khatuali block of the district which is about 80 km from delhi are taking gladiolus crop as main cash crop and have formed group of 14 farmers who undertake all the scientific management of the crop including post harvest handling. the farmers who have adopted gladiolus cultivation as entreprenureship mostly grow three varieties namely white prosperity, eurovision, & pusa chandani having preferred demand in the market.

The Economics of Gladiolus Cultivation is as under.

Besides income from selling of spikes, the corms also give extra income. The farmers have created additional assets like Jeep for transportation of flowers and other produce and also their standard of living increased which ultimately gave them social status.

After taking vocational training at KVK some of the farmers and rural unemployed youth adopted poultry farming (broiler – Ross/van Cob Strain) as business, which resulted in better return. Presently about 20 rural youth and farmers are engaged in poultry farming and marketing. The average performance of poultry units developed as entrepreneur during last 5 years is as under

Sugarcane is the backbone of agriculture in the district. The average Sugarcane yield is 702 q/ha. Since last few years farmers are facing problem for payments from Sugarcane factories. Most of the mediam resource rich farmers are not able to support household from Sugarcane crop alone due to higher cost of cultivation and income after one year of planting. This problem paved a pathway to think about alternate Sugarcane based system Which can give additional income besides improving soil health. The intercropping of French bean with S. cane has become so popular among the farmers that its adoption has increased many folds during last two years because the return from the Frenchbean crop was able to support the household during first four months of Sugarcane crop besides enriching the soil with bio-mass.

Technology/Process which has intervened for its success

Main target of the KVK was to increase net profit of farmer and also give viable intercropping module for timely sowing of spring sugarcane in Feb to March for getting higher yield.

Effect of the Technology/Process

Suitability in the Existing farming/Cropping System : The agriculture in the district revolves around Sugarcane based system which gives ample scope for introducing any intercrop which do not harm the main crop. The frenchbean is sown during february as intercrop in spring sown sugarcane.

Acceptance of Technology/Process : Intercropping of Frenchbean with Sugarcane is well accepted by the farmers of the district especially in Baghra block as it improved the health of Soil & as well as gave good profi.

The Frenchbean + S. cane cultivation is able to support the household economically. The Frenchbean bio-mass can improve soil health and water holding capacity. A large no of employement is generated seasonally (8-10 man days for 2-3 months) specially for women as most of the activities like seed sowing, weeding, picking, grading and packaging is done by women.

Muzaffarnagar is an agriculture based & sugarcane dominated district. Majority of its population (70%) are engaged in agricultural activity for their livelihood. The average land holding is below 1.0ha. In case of agriculture and allied activities most of the farmers and landless labours rearing local breed of milch animals & poultry birds. In the recent years, the broiler poultry had demonstrated remarkable growth and emerged as the fastest growing enterprise.

In the district Muzaffarnagar, as one of the mandate of kvk, it was visualized that vocational training to rural youths may go a long way in providing self-employment and increase their earning. The scientists in collaboration with the farming community identified that poultry can be a lucrative enterprise.

Presently about 50 rural youth and farmers are engaged in poultry farming and marketing. The average performance of poultry units developed as entrepreneur during last 5 years is as under.

Farmers purchased day-old chicks, vancob strain (venky) & chick starter ration/finisher ration & other necessary equipment from Karnal (Haryana). The chicks rate range from Rs.05.00—35.00/chick as per demand/season &feed rate an average Rs.30.00/Kg. The total cost on rearing/bird is Rs.125.00/=,wherever the sale rate of per bird is Rs75.00/Kg at the time of sell (upto 40 days) each bird attained an average 02.00Kg live body weight. Therefore, net profit per bird is (150-125=25/=). If flock size consist 5000 birds per batch & total five batch in a year than net profit in a year is approximately Rs (25*5000*5=6,25,000/= in normal condition. Mostly, the sale of broiler poultry at Delhi market directly or through agent.

It is clear that broiler poultry farming is quite remunerative. However, the following problems were creating hurdles in proliferation of the enterprise :

The soil health scenario of NICRA Village Rasoolpur Jaatan is as under.

Self Help Group of Farm Women

Recognition /Awards (If Any)

MANAGEMENT OF EARLY SHOOT BORER IN SUGARCANE THROUGH TRICHOCARDS

Sugarcane is one of the most important crop of distt. Muzaffarnagar (U.P.). The average yield of sugarcane in Muzaffarnagar is low as compared to the other sugarcane growing areas in country. Among the different reasons responsible for low yield of sugarcane in Muaffarnagar, insect pests are the most important one. About more than 100 insect pests are associated with sugarcane crop. Among all insect pests, sugarcane early shoot borer is one of the serious problem which affects yield of sugarcane crop maximum. It can cause losses up to 35-40%. Its caterpillar destroys about 20% of the young shoots during April-June annually. The larvae after hatching reach the plant base, bore into the shoot & feed there. In years of severe infestation it reduces the sugarcane yield from 30-70%. The caterpillar feed in the stem and cut off the growing point (Central whorls of the leaves) causing wilt at the later stage.

Due to pest outbreaks, pesticide resistance, more stringent pesticide regulation & concern about human health & environmental quality have renewed the interest in Integrated Pest Management programmes that emphasizes the biological control which is very effective pest control strategy. The safety of biological control is outstanding as may natural enemies are restricted to their host & hence no effect on non target species. Biological control is relatively permanent, safe, economical & environment friendly. Among biological control agent for early shoot borer. Trichogramma is widely used for its control. Trichogramma species are the most widely used insect natural enemy in the world, partly because they are easy to mass rear, they attract many important crop insect pests and can be easily combined with other control measures with IPM programmes.

Farmers in village Shahdabbar used various insecticides for control of early shoot borer in sugarcane. Performance of Trichocard for management of early shoot borer was maximum with highest benefit cost ratio ranging from 2.9 to 3.4 compared to the chemical practice and farmers realized the advantage of higher net income.

Introduction of Trichocard for management of early shoot borer

Biological control is a eco friendly and economical practice. Trichocards are more effective if installed at Economic Threshold Level (ETL) less than 5% and also manage the other borers of crop. It was estimated that due to use of Trichocards application of about 50 Kg/ha hazardous insecticides was avoided which resulted in non use of 2500 Kg hazardous insecticides in whole village. The cost of 2500 Kg insecticides is approximately Rs. 1,75,000/-.The cost of Trichocards for one ha is Rs. 900 which means Rs. 45000 was spent against Rs. 175000. This clearcut indicates that this technology is not only safe but also very economic.

GREEN FODDER FOR MANAGEMENT OF METHANE IN LIVESTOCK

The National Initiative on Climate Resilient Agriculture project was implemented in village- Shahadabbar Block- Budhana district- Muzaffarnagar (U.P) since 2011-12. There was a deficit of green fodder for animal feeding & most of the farmers practiced wheat straw feeding. Wheat straw feeding causes emission of methane/ methanogenesis. Methenogenesis/emission of methane from livestock is major GHG. To minimize the damage from this component KVK, Muzaffarnagar took the initiative & decided to conduct demonstration on green forage. During the kharif 2014-15, KVK conducted 30 demonstrations of sorghum forage (Sorghum vulgare) high yielding variety PC-6 on 10.00 ha. at farmers field .

The impact of demonstration revealed that the productivity of green fodder enhanced/increased 18.64% as compared to local variety & consumption of wheat straw reduced side by side. The improvement was observed in milk production, fertility, better animal health & growth of calves also.

During the crop season, farmers feed sufficient amount of green fodder to livestock & least amount of wheat straw which result in minimum emission of methane gas.

The KVK conducted more than 200 CFLD under pulses with latest varieties of Mung & Urd. The scientific cultivation at farmers field resulted in better economic result which motivated the farmers to grow more pulses. The impact of demonstration on economics and expansion in area is as under . 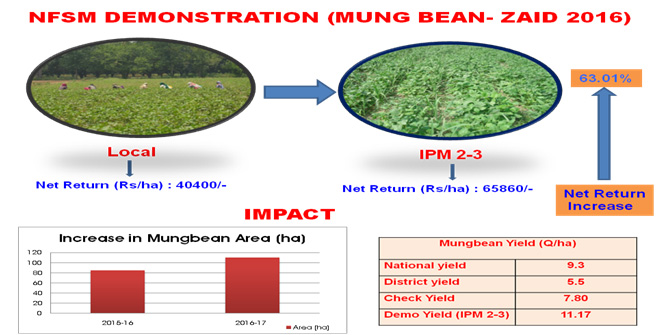 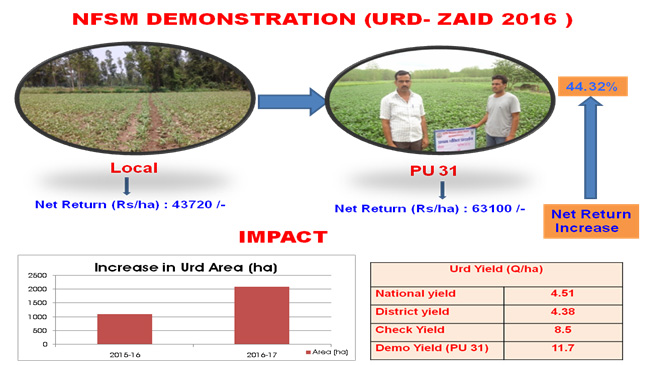 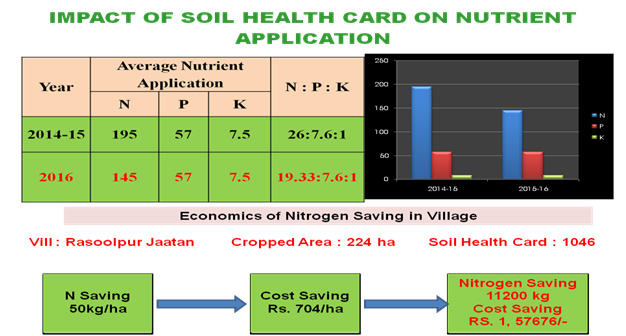